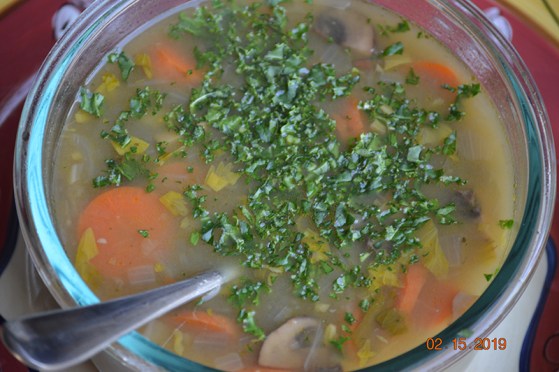 Last year was the “Year of the Pulse.” Fancy word for beans. Despite the low-carb craze, beans are still an incredibly potent health food. They were good before the carb thing, during it and yes, are still good. As one writer said, they “scour” your veins. And that’s not to mention they are loaded with B-vitamins and iron (in case you don’t get enough from your cast iron cookware). Now those are important vitamins and minerals in a vegan household.

The only problem is, I haven’t been in the mood for cooking as much lately, winter doldrums maybe, after long weeks of zigzagging temperatures from -60 degrees (with the windchill) to +30 degrees overnight, ice, snow, salt, slush and high winds. Oh, and did I mention the coyote having a party in my backyard? So I needed something quick and easy.

I looked through my kitchen library of beans and chose lentils because they cook quickly, small red beans (really, Goya calls them that) because they’re pretty, and then I thought barley might be a nice, chewy and substantial addition. I had almost a pound of Crimini mushrooms I needed to use up before my new CSA box arrived from Andy’s office, and as always I had carrots and celery in the ‘fridge and onions. And that’s all I needed plus five minutes prep-time and thirty minutes Instant Pot time.

Oh, and one more thing: I always keep Vegeta in the cabinet. I usually make my soup broths from the veggies I saute when I start to make a soup, but every once in a while, I throw in the Vegeta, and it’s very good! I can county on Andy liking something when I use the Vegeta, and since I was making a point with the beans, I figured that would help me make my case.

One thing I should have used but didn’t this time was turmeric, which I should be putting into our food every day for best benefits and beautiful dishes.

Guess what? This soup took me no time, was delicious, and had beans in it. And best of all . . . Andy liked it!

One thought on “Quick Instant Pot Soup From Kitchen Basics”