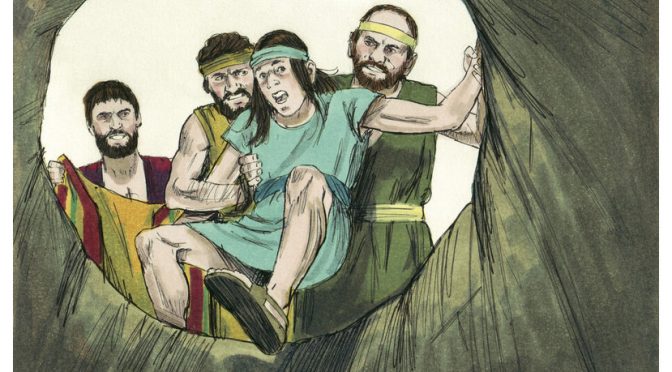 PART I: The Joseph Story, Exile & Return, Promise to Fulfillment

Before I take a look at the continuation of the animals’ story in Vayeshev, I’d like to share some work I did many years ago when I explored “meals in Genesis.” This is a diagram of part of Joseph’s story. It forms a narrative chiasm with a feast at the center and two simple meals of bread balancing each other toward the beginning an toward the end (7a and 7b):

What does this intricate symmetry of the story tell us? It is a structural representation of the major themes of the story, exile and return, promise and fulfillment — and in that, echoes the major themes of the Torah. Step-by-step, each element of the story reverses itself following Pharoah’s feast. What seems increasingly impossible in the first half becomes reality as the second half of the story unfolds. As Joseph moves further from his dreams in the first half, he sees progressive fulfillment of the dreams in the second half. Through the stages of the chiasm, we see growth in the characters of Joseph and his brothers, the brothers taking responsibility for their actions and Joseph growing past his boyish arrogance. This literary masterpiece, “set forth by a master storyteller who employs with consummate skill the novelistic techniques of character delineation, psychological manipulation, and dramatic suspense,” (Nahum Sarna, The JPS Torah Commentary: Genesis, p. 254) carries the Torah story forward.

Vayeshev contains nine references to animals, one of them oblique, when the brothers refer to Joseph as “our own flesh.” The Torah uses three descriptive words in speaking of human beings, two of them shared with animals: shared descriptive words are nefesh (flesh animated with the breath of G-d) and basar (meat or a carcass). Tzelem Elo(k)im, the “image of G-d,” whatever that means, is unique to human beings. In referring to Joseph as flesh, the brothers in some sense characterize their relationship with him.

Gen 37:2b – “At seventeen years of age, Joseph tended the flocks with his brothers, as a helper to the sons of his father’s wives, Bilhah and Zilpah.”

Gen 27:12 – “One time, when his brothers had gone to pasture their father’s flock at Shechem, Israel said to Joseph, ‘Your brothers are pasturing at Shechem. Come, I will send you to them’…” Joseph requests help and finds the brothers pasturing in Dothan.

Gen 37:25 – “Looking up, they saw a caravan of Ishmaelites coming from Gilead, their camels bearing gum, balm, and laudanum to be taken to Egypt.”

Gen 37:31 – “Then they took Joseph’s tunic, slaughtered a kid, and dipped the tunic in the blood. They had the ornamented tunic taken to their father, and they said, ‘We found this. Please examine it; is it your son’s tunic or not?’ He recognized it, and said, ‘My son’s tunic! A savage beast devoured him! Joseph was torn by a beast!’”

Gen 38:12b – …”Judah went up to Timnah to his sheepshearers, together with his friend Hiram the Adullamite. And Tamar was told, “Your father-in-law is coming up to Timnah for the sheepshearing.”

Gen 38:20 – “Judah sent the kid by his friend the Adullamite, to redeem the pledge from the woman; but he could not find her…I did send her this kid, but you did not find her.”

Once again, we have a pastoral setting, a setting in which the lives and livelihoods of these people are enmeshed with their flocks and herds. Their animals are their daily work, their sustenance and the symbol of their wealth.

In this section, though, a more complicated relationship unfolds. We have two stories in which a kid becomes a symbol of deception: the brothers kill a kid for its blood so they can deceive their father with regard to Joseph’s “end,” and one of the brothers, Judah, kills a kid to pay Tamar who deceived him into thinking she was a harlot. The story of Judah and Tamar also picks up on the theme of failed responsibility, in this case Judah failing to honor his levirate obligation to Tamar, in the case of Joseph, as he fails to completely save his brother from harm, then participates in deception. Judah’s earlier failure with Joseph makes him especially uneasy when he cannot find “the harlot,” Tamar, to pay her with the kid.

Finally, we have the readiness to ascribe Joseph’s death to a “savage beast.” Reuben wasn’t present when Judah persuaded the other brothers to sell Joseph to passing Midianites, but he participated in the deception of dipping Joseph’s coat in the blood of a kid to persuade their father that he had been killed by a savage beast. All the brothers maintain the lie for years, concealing the truth from Jacob even after he and Joseph are reunited.

We know from the Noah story that the “crime” the animals committed that led to their utter destruction in the Flood is that they killed human beings. They too participated in the violence rampant in the earth. Following the Flood, G-d seems resigned to some basics of human and animal nature and promises never to destroy the earth again. “Savage” beasts did kill people on occasion, and it was not difficult to deceive Jacob with the bloody garment.

But there is another aspect to this action: the brothers not only fail to take responsibility for themselves, they blame their evil action on a made-up “savage” (non-domesticated) animal and kill a real (domesticated) animal, a kid, to carry out the subterfuge. In the Judah and Tamar story, a kid stands in for Judah’s responsibility with Tamar, and when the kid doesn’t reach Tamar, it represents Judah’s failed responsibility.

Now all this may be subconscious and accidental, but in such an artfully woven story, one wonders if the animal substitution motif might not be intentional? This theme is, after all, also major in the Torah, animals standing in for humanity’s sin, as atonement for transgression.