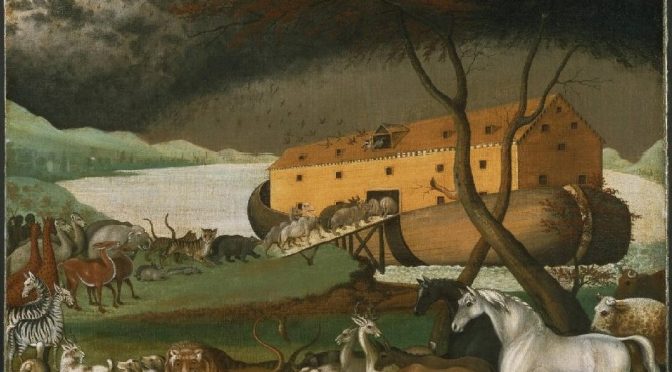 “Justice, justice you shall pursue, that you may live, and inherit the land which the LORD your God gives you.” (צֶדֶק צֶדֶק, תִּרְדֹּף–לְמַעַן תִּחְיֶה וְיָרַשְׁתָּ אֶת-הָאָרֶץ, אֲשֶׁר-יְהוָה אֱלֹהֶיךָ נֹתֵן לָךְ) – Deut. 16:20

Religions begin with looking at the world and seeing a problem, then imagining solutions. For the Torah and later Judaism, that problem is injustice. Since injustice is a problem in relationship, the solution the Torah imagines is a body of laws to guide first humanity, then a subset of humanity, the Israelites, in establishing right relationships.

The justice issue informs the overarching thematic structure of the Torah, set out in Genesis 1-9: creation, moral failure, roll-back of creation, a new creation. When morality fails and relationships are out of balance, catastrophe follows. When justice fails, worlds return to pre-creation emptiness and void. All of creation interconnects and depends on each part, and each part connects to and depends on others. Moral failures in any area of life affect everything.

My primary purpose in Torah Ecology is to explore what the Torah envisions as correct relationships. From my study so far, I believe the parameters are much wider than the human realm, embracing other creatures and the whole earth.

Our assumption is that G-d intends to wipe out humanity because of its “lawlessness,” because it “corrupted” its ways, but the text doesn’t say humanity — it says “all flesh” (בָּשָׂר – basar). The word signifies the substance or flesh of a being, most often without life in it, a carcass suitable for food or for sacrifice on the altar. It refers to any kind of creature.

The word בָּשָׂר – basar, meaning flesh, contrasts with נֶּפֶשׁ – nefesh, often translated “soul” — yet Gen. 12:5 reports that “Abram left Haran with his wife Sarai and his brother’s son Lot, and all the wealth that they had amassed, and the נֶּפֶשׁ (nefesh) – persons that they had acquired in Haran…”  The story of Noah and the flood suggests that נֶּפֶשׁ (nefesh) has an even more comprehensive meaning than “persons,” that like basar, it doesn’t only refer to human beings. Perhaps a better translation, then, is living being, substance given life by the breath of G-d.

Along these lines, Gen. 1:29-30 reads, “G-d said, “See I give you every seed-bearing plant that is upon all the earth, and every tree that has seed-bearing fruit; they shall be yours for food. And to all the animals on land (חַיַּת הָאָרֶץ – hayyat ha-aretz), to all the birds of the sky (עוֹף הַשָּׁמַיִם – of ha-shamayim), and to everything that creeps on earth (רוֹמֵשׂ עַל-הָאָרֶץ – romes al ha-aretz), in which there is the breath of life (אֲשֶׁר-בּוֹ נֶפֶשׁ חַיָּה – asher bo nefesh hayyah), [I give] all the green plants for food.”

In Gen. 2:20, we learn of a further division of land animals into domesticated and wild: “And the man gave names to all the cattle (בְּהֵמָה – behemah) and to the birds of the sky and to all the wild beasts (חַיַּת הַשָּׂדֶה – hayyat ha-sadeh)…”

The word ”flesh” (בָּשָׂר – basar), then, in this context means all creatures were lawless and corrupted their ways on earth. The text emphasizes this point in the phrase, “The earth became corrupt before G-d” (וַתִּשָּׁחֵת הָאָרֶץ – va-tishaket ha-aretz). It also implies that all living beings were already dead, that the breath of life wasn’t within them. They were not נֶּפֶשׁ – nefesh. They were “basar,” carcasses, devoid of the breath of life.

Certainly this theme isn’t presented in a one-to-one correspondence, life vs. lifeless flesh. The creatures who enter the ark are “all flesh in which there is the breath of life” (מִכָּל-הַבָּשָׂר, אֲשֶׁר-בּוֹ רוּחַ חַיִּים – mi-lol ha-basar asher bo ruach hayyim) – Gen. 7:17. But it is the ongoing and repeated association of flesh with the beings on earth before the flood that focuses attention on the material and therefore transient aspect of life on earth, dependent on the breath of G-d for life.

More than that, skillful and repeated use of flesh, בָּשָׂר – basar, and נֶפֶשׁ – living being, points to the equality of all creation in this respect: all creatures, not only humans, depend on G-d for life, and their life is the breath of G-d. At the same time, all creatures, including humans, without the breath of life from G-d are merely meat, dead carcasses.

The emphasis on the equality of all being on earth finds another expression in Gen. 7:23: “All existence (כָּל-הַיְקוּם – lol ha-y’kum) on earth was blotted out — man, cattle, creeping things, and birds of the sky; they were blotted out from the earth.” An alternate translation of “existence” is “substance,” again a reference to the material aspect of all creatures on earth, human and otherwise. And those who leave the ark are all “living things of all flesh” (כָּל-הַחַיָּה… מִכָּל-בָּשָׂר – kol hayyah … mi-kol basar) – Gen. 8:17.

What Noach describes is a world in which all living beings became lawless and corrupt and all, therefore, suffered the consequence of their moral failure. Creation rolls back to watery emptiness and void but for the tiny remnant, human and non-human, who still have G-d’s breath of life in them, כָּל-הַחַיָּה (all living beings), floating on the vast, dark water in a tiny ark.

The story of the flood reverses the imagery of the creation story in Gen. 1 and is rich with allusions to that creation narrative as creation rolls back. But it is the reference to corruption in the flood story that makes me wonder what, exactly, brought on this roll back to pre-creation darkness and emptiness. Significant differences between the first creation and the new one that follows the flood suggest an answer.

The key Hebrew stem sh-h-t, “corrupt,” appears seven times in the flood narrative, according to Nahum Sarna in the JPS Torah Commentary. These further comments are telling: “The universal corruption is further defined as hamas. This term parallels “no justice” in Job 19:7 and is elsewhere the synonym of “falsehood,” “deceit,” or “bloodshed.” It means, in general, the flagrant subversion of the ordered processes of law.”

This helps us understand the nature of the lawlessness and corruption permeating all of creation that brought on the flood. A comparison of Gen. 1:29-30, quoted above, and Gen. 9:2-5 tells that story, once again including non-human creatures with humanity in both moral failure and consequence. Gen. 1:29-30 provides “every seed-bearing plant that is upon all the earth, and every tree that has seed-bearing fruit” to human beings for food and “all the green plants for food” to every kind of creature. In other words, both humans and animals are offered a vegan diet. Everything changes in the post-flood world:

Gen. 9:2-5: “The fear and the dread of you shall be upon all the beasts of the earth and upon all the birds of the sky—everything with which the earth is astir—and upon all the fish of the sea; they are given into your hand. Every creature that lives shall be yours to eat; as with the green grasses, I give you all these. You must not, however, eat flesh with its life-blood in it. But for your own life-blood I will require a reckoning: I will require it of every beast; of man, too, will I require a reckoning for human life, of every man for that of his fellow man (brother).”

The new creation of Gen. 9:2-5 differs profoundly from the creation of Gen. 1-3 that it mirrors. G-d specifically allows meat-eating to humans, generating fear throughout the animal kingdom. Immediately this reluctant permission is ringed with prohibition: not to eat flesh with its life-blood in it. Further, human beings are not to kill their “brothers,” their fellow humans, an allusion to the story of Cain and Abel, suggesting that every homicide is fratricide.

The passage also, however, pre-supposes meat-eating among animals and cautions they will now be held accountable if their prey is human. Both animals and humans, in taking life that was not permitted to them in the original order of creation, acted lawlessly and corruptly. For both animals and humans, there were consequences for moral failures tied to unjustly taking life that returned the world to watery emptiness and void. In the new creation, while G-d gives humans and animals permission to continue their practice of eating meat, restrictions surround the practice and they are warned of their accountability.

Humans killed their own family, and animals killed humans for food in the pre-flood world. This is the lawlessness and corruption that subverted G-d’s plan and brought down the first creation. In the brave new world post-flood, G-d recognizes and accepts the reality of human and animal natures and recluctantly, and I have to imagine sadly, allows meat-eating with restrictions to humans and animals according to their natures.